Last month, my good friend, Chris, hooked me up with a purchase of 10 nice, blackwall-era Hot Wheels that he had seen listed on the St. Louis area Facebook Marketplace. The oldest of the 10 is this Poison Pinto from 1977.

The real-life Ford Pinto was among the first generation of subcompact cars – including the Chevrolet Vega and the AMC Gremlin – introduced by American automakers in 1970 to compete against popular Japanese imports. The Pinto was introduced in September of 1970, first as a 2-door fastback sedan. The 3-door hatchback followed in February of 1971 and, a year later, the 2-door station wagon made its debut. The Pinto was rear-wheel drive, with engines ranging from the 1.6L Kent inline 4-cylinder to a later 2.8L Cologne V6, and either a 4-speed manual or 3-speed automatic transmission.

The Hot Wheels Poison Pinto – based on the station wagon model – was first cast in 1976 with the same paint and tampo as this one, but wearing redline wheels. It was also included in both 1976 and 1977 in the Super Chromes 6-Pack, wearing redlines the first year and blackwalls in ’77.

There are about 10 variations of the Poison Pinto up until 1985, and about 4 more after it was retooled for the Hot Wheels Collectors club in 2003. In 1979, the casting was used for The Thing from the Heroes series, the only other version I have in my collection. 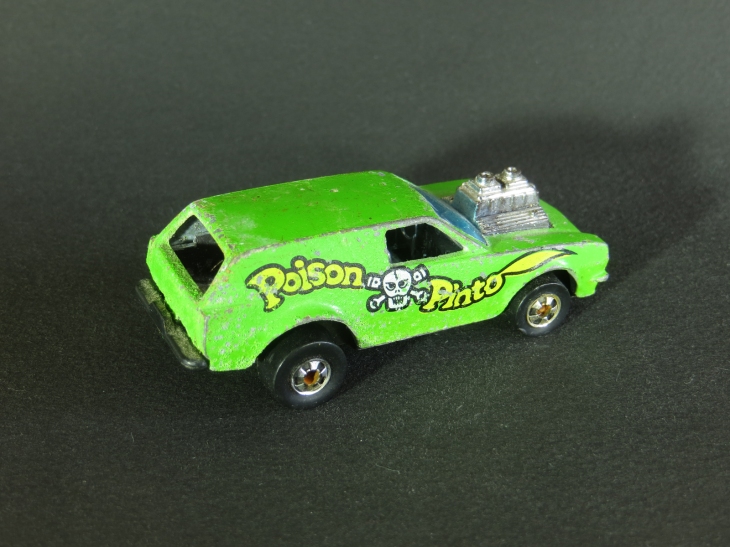 As a bonus, the Poison Pinto comes complete with a set of tools molded into the rear of the chrome plastic interior.

I downloaded Yard Sale Treasure Map for my phone this summer and it works pretty well. It finds all of the nearby sales listed on Craigslist and maps them out for you. You can click on a pin to see the description of the sale, then use either Google or Apple maps to get directions to the sale.

On a recent Saturday morning, I opened the app and headed for a sale nearby that looked like it might have some promising items. When I arrived, I found a garage full of car parts, old toy trucks, and a few boxes of loose diecast cars.

This Hot Wheels Emergency Squad from 1977 is one of a few items I took home. It’s a little rough, but I’m fond of this model because it’s identical to the one I still have from my childhood. The casting was first released in 1975 and has also appeared as Ranger Rig and Rescue Ranger. 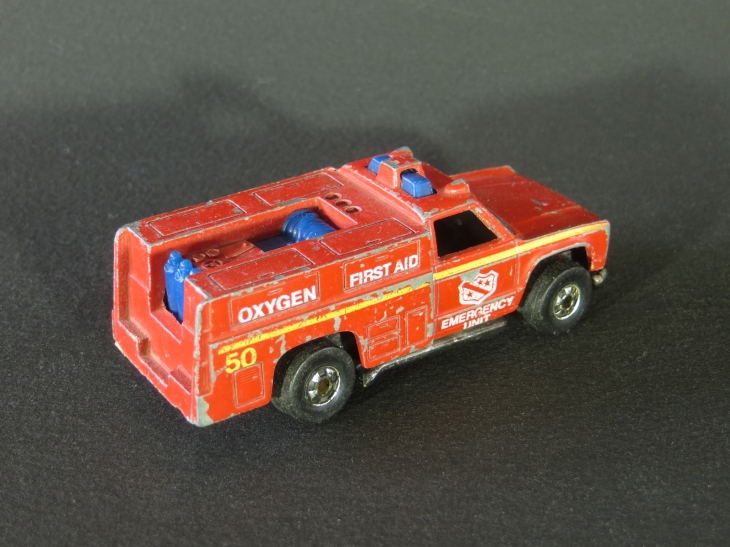 The oldest Hot Wheels model in the JG Collection is also in the poorest condition. This is the 1977 first-release of T-Totaller in blackwalls –  it could also be found, much less commonly so, with redlines. The casting is a radically hot-rodded Ford Model T van of which there are 7 variations up until 1985. In 2011 it was retooled for the Hot Wheels Collectors Neo Classics Series.

Click here to see my other T-Totaller, a much cleaner example of the 1980 release. 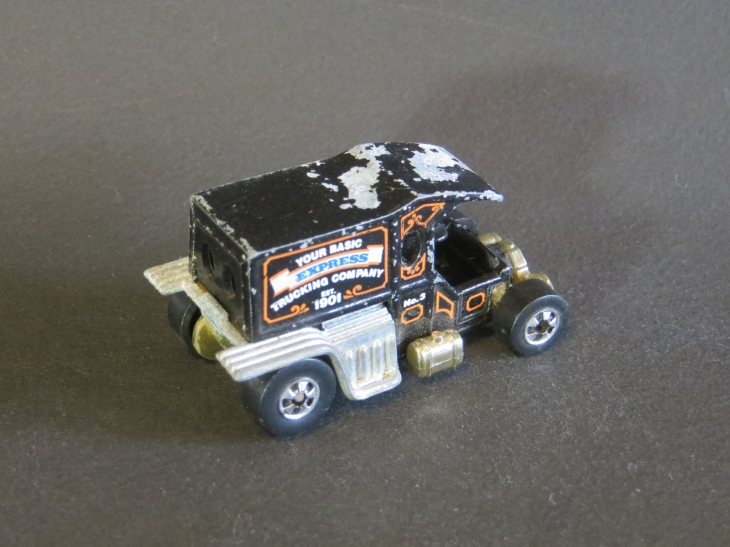 The Hot Wheels Rock Buster is a rear-engine, single-seat desert racer. This yellow blackwall model, which I got from the Dealer, is from 1977.

First introduced in 1976, Rock Buster can be found in about 9 different variations, including a green version from 1980.

The Hot Wheels Odd Rod, first released in 1977, has a very appropriate name. The giant rear engine is mounted sideways and a pair of radiators jut out ahead of the rear wheels. The front of the stretched chassis is covered in clear plastic, through which can be seen a pair of fuel tanks mounted just in front of the two-seater passenger compartment.

Odd Rod can be found with either redlines or blackwalls and there is also a plum-colored variation that commands a much higher price. In 1984, the yellow blackwall version was cast in Mexico and France.

In the history of my collecting, this was a relatively early eBay purchase from several years ago. When I excitedly snatched it up for a low price, it wasn’t until I got it in my hands that I realized most of the flame tampo was worn off the front, and even worse, it was missing its plastic windshield. It was a disappointing experience, but it taught me to study up a little before buying.

With the cold weather outside (and the lack of garage sales), I’ve been spending a little time organizing my collection. I have quite a few cars that I’ve had since before I started this site that have never been photographed. Many of these are in fairly rough shape, but a few fairly nice models have somehow escaped being featured here.

Hot Wheels recognized the 1936 Ford Coupe early in the redline era with the 1969 Classic ’36 Ford Coupe, which featured an opening rumble seat. Neet Streeter didn’t appear until 1976 – a similar casting with a hood scoop replacing the rumble seat. In 1977 the casting showed up in both the Super Chromes and Flying Colors series, of which mine is an example. Although my red, white and light enamel blue car – from the collection of Big A – is in pretty clean shape, the plastic scoop no longer protrudes from the hood and instead rattles around inside of the car. 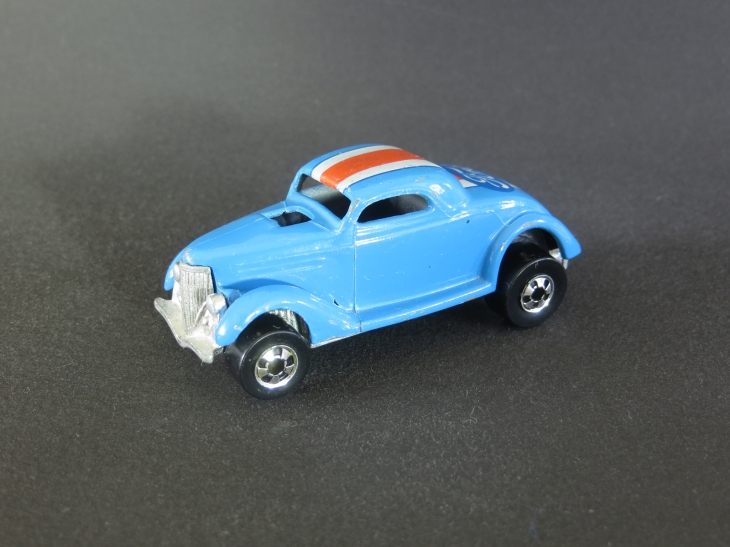 Neet Streeter has proven to be a popular casting and, after a retool, can be found in about 30 different variations.

Leave it to Hot Wheels to turn an armored truck into a funny car. First cast in 1972, Funny Money features dual blown engines which are revealed when the body of the truck is tilted back. The first release had an orange plastic front bumper, but that was removed for subsequent variations. My favorite release is the plum model from 1974 that is decorated with flowers and peace signs in yellow, green and orange. In 1977, Funny Money was given Brink’s livery and could be found with both redline and blackwall tires. In 2007, the casting was retooled for the 40 Years of Hot Wheels set and has seen about a half dozen variations since then.

My blackwall version from 1977 was found on eBay. 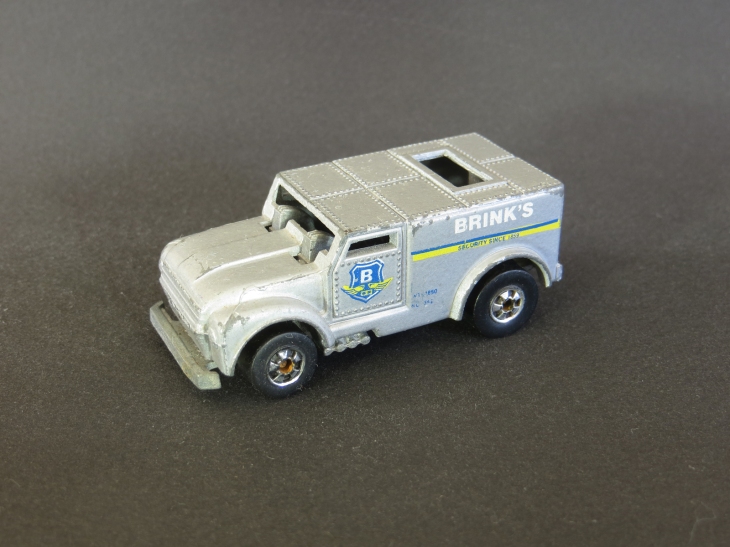 The Race Case
Create a free website or blog at WordPress.com.